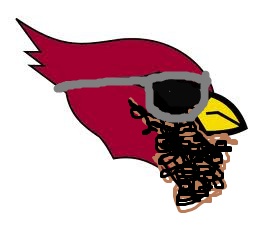 Posted by Tom Keiser at 6:37 PM No comments:

When talking about Phils' relief, gimme some Rolaids! 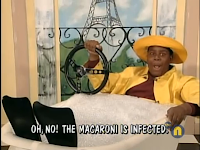 Phils fans are now screaming for Jose Mesa, now that Ryan Madson pulled a Brad Lidge and went all Adam Eaton up in Pittsburgh's face. Of course it's not entirely Lidge's fault that Philadelphia can't close the deal. As we speak Chase Utley made a sacrifice fly and Rollins stayed at third. Maybe that's playing it safe, but how safe are we when the Phillies have a realistic chance of dropping the first two games to the Pirates? Ryan "Pierre Escargot" Howard just hit a long one to give us a three-run cushion in the tenth. And yet I'm still clutching my chest.

Philly keeps on finding ways to win and lose spectacularly. Take Sunday, when Bruntlett was a force to be reckoned with at bat, had a triple robbed of him by Jeff Francouer, almost gave the game away and made the non-perfect game Play of the Year. Now what was I talking about? I was mesmerized just now by Meat Loaf pouring a giant bottle of A-1 Steak Sauce and serenading his small "m" meatloaf with "I'll Do Anything For Love." It's that kind of night, and needless to say my stomach is turning.

But anyway, these spectacular plays hide the team's major fault: not being able to make the small plays that seal the deal. Poor fielding leads to tighter save situations that for one reason or another Brad Lidge can no longer deal with (though he'll probably be back to 2008 form at least once more in his career). And with a subpar relief corps Cole Hamels (whose 8 shutout innings were wiped away with the swing of Brandon Moss' bat) cannot be pleased.

But all is well in the Delaware Valley, for Ryan Howard hit a ball long enough for a $2000 hoagie. Who knows, maybe we'll win tomorrow and take two out of three against the gang from "Major League".
Posted by Tom Keiser at 9:39 PM No comments:

Posted by Tom Keiser at 4:10 AM No comments:

Are these things still popular?

Man, I should've been ablogging all along. Maybe I could've been a half-somebody, instead of a quarter-somebody. I could've had class I COULD'VE BEEN A CONTENDER!!! AND BY CONTENDER I MEAN A SYMBOLIC APOLOGIST FOR SQUEALING ON COMMUNISTS!!!

In all seriousness, in spite of not being able to access my Adsense account at all, I think I might start to ablog soon. See you then, again, again.
Posted by Tom Keiser at 2:29 PM No comments: Super Bowl XLII was without a doubt one of the greatest Super Bowls I have ever seen. Then again, I was born between XVIII and XIX, didn’t start watching until XXIV, went to bed before XXV, had homework for XXVI and XXVII, and was blind until shortly before Super Bowl XXXIX. I then spent the next two years in a monastery.
To completely contradict my lead, I watched most Super Bowls for the commercials, and went to the bathroom during the game. This year, I watched both halves, and took a monster dump during Tom Petty’s halftime show. During the rest of the game, my john was singing, “I Won’t Back Down.”

While my good friend Drew Bernier is apologizing for giving the New York Football Giants of Anaheim no chance against the New England Patriots, I will write of the real Upset of the Century, that being my five dollar bet with Frenchy that the Gints would beat the Pats outright.

The Giants were only twelve point underdogs against the Patriots (or as I call them, the TAPE-riots!!!) However, Joe Willie Namath didn’t have to defeat the evil Bill Bellichick, six hundred and sixty-sixth son of Satan himself, and Thomas Marcia Brady. Eli Manning was not even the biggest quarterback in New York (Jared Lorenzen represent)!

However, the Patriots had all of this hype distracting them from the game, while the Giants used the game to distract them from the hype. So few people picked the Giants to do anything but lose a close one. If I were to lose, so what? If the Giants were to eke it out, however, I knew I had something to gloat about.

It’s a damned shame, however, that I couldn’t use it to buy fifty microseconds of Super Bowl ad time. I had so much to say, and unlike Salesgenie.com, most of my commerical ideas could hardly be construed as racist.

Their first ad, featuring a harried Indian man putting the fate of his seven children in the hands of a white genie, was not even the least comfortable ad they had. I can’t even begin to describe the craziness of the panda bear ad. First off, how can the two panda bears who own the bamboo shop have an Engrish accent, while the genie speaks “correctly”? If the pandas are supposed to represent Asian stereotypes, what people were represented by the grizzly bears at the zoo that were mentioned offhandedly? This is the “Springtime for Hitler” of commercials; one that is so blatantly inappropriate, that you continue to speak about it for days.

As for the Planters cashew ad, where the hag gets all the men by making herself smell like nuts, I have to tell you a dark little secret. I have tried to pick up men that way, and half of them had to go to the hospital for allergies.

If you going to use a foodstuff to attract something, don’t use Doritos unless you want to reenact that weird-ass scene from The Shining where the one guy is getting kinky with someone in a bear costume. Some may question this logic, because the sicko in the ad used a mouse costume, but after that Salesgenie.com ad, you’ll be too guilt ridden to try it with a bear.

Audi used another classic movie, The Godfather, to freak out people. At least one blogger hoped the guy crapped his pants before realizing it was only motor oil. Later in the evening, I was kind of hoping retroactively that the horse Shaq rode in on in that Vitamin Water ad would be on “Old Luxury’s” bead, rather than a Rolls Royce grille.

Speaking of drinkable Chanel No. 5, Sobe’s ad, where lizards danced as if they were in the “Thriller” video, was anything but “thrilling”. However, that was nowhere near as confusing as the ad for the Disney film Wall-E, where I think he was trying to have sex with the vacuum cleaner.

The best ads of the night had to be the FedEx spot, where big-ass pigeons were dropping figurative crap on the streets, and the Coke ad, where the Stewie Griffin and Underdog balloons battle for the overinflated capitalist icon.

Wait ‘til next year, thought, where MY Super Bowl ad will be on. Two words: giant apes humping luggage.
Posted by Tom Keiser at 1:23 PM No comments:

Redskins over Seahawks; Chargers over Titans; Buccaneers over Giants; Jacksonville over Pittsburgh.

Good, that's my blogging for the week.
Posted by Tom Keiser at 2:41 PM No comments: